The ranking of the most powerful Android smartphones according to AnTuTu for the last month is out. Gaming smartphones have the lion’s share, and Samsung, the world’s number one in the mobile market, only manages to include a single model.

Like every month, the AnTuTu benchmark service publishes its updated ranking of the best performing Android smartphones. Since the measurements are calculated from August 1 to 31, new smartphone models like the Huawei Mate 50 are not yet represented. Some devices that are not released in enough markets are also excluded. Waiting for the release of Snapdragon 8 Gen 2 expected in November 2022it is mobiles equipped with a Snapdragon 8+ Gen 1 chip that stand out.

The Asus ROG Phone 6 takes first place, followed by the iQOO 9T. Despite its “simple” Snapdragon 8 Gen 1, the Nubia Red Magic 7 manages to close the podium. The Xiaomi 12S Ultra just misses third place, ahead of the Black Shark 5 Pro. Of course, we have a lot of gaming-oriented devices in this ranking.

In sixth place, we find the vivo X80, the only representative of the top 10 equipped with a MediaTek chip, in this case the Dimensity 9000. Paradoxically, it does better than the vivo X80 Pro, eighth, which embeds a Snapdragon 8 SoC Gen 1. Between the two is the Motorola Edge 30 Pro. The only Samsung terminal is the Galaxy Z Fold 4 5G thanks to its Snapdragon 8+ Gen 1 chip, while the Mi 12 Pro brings up the rear.

We see that all the top 10 smartphones have at least 12 GB of RAM and 256 GB of storage space. If the SoC is the main determinant of the power of a mobile, the memory, but also the software optimization and the management of the heating are among the elements to be taken into account. For a smartphone considered powerful, the latest high-end chip is not enough: you also need LPDDR5 RAM and UFS 3.1 storage. 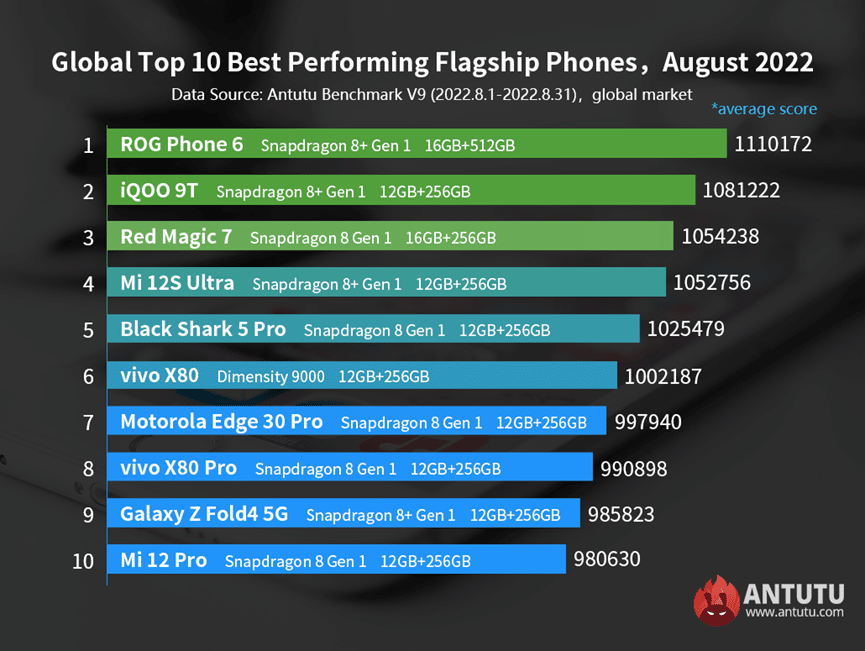