The last few weeks have been hectic on the premium smartphone market, in particular with the release of iPhone 14 and 14 Pro or even that of Galaxy Z Fold 4 and Z-Flip 4. But to stifle its offer, Samsung has also launched another much more modest smartphone, the Galaxy A23 5G. Positioned on the mid-range, the latter completes the very good A family of the South Korean manufacturer, already including among others the Galaxy A33 and A53. It stands out above all for a beautiful camera, a long battery life and, as its name suggests, compatibility with 5G.

The Galaxy A23 sports a design that is very reminiscent of its big brother, the Galaxy A33. We are entitled to rounded edges giving an excellent grip. We also find on the back the rather protruding photo block but in perfect continuity with the rest of the hull. The only real difference is in the location of the fingerprint reader. The latter is indeed positioned on the side and not under the screen like the more expensive models.

Not surprisingly, the device is made entirely of plastic with the exception of the screen. The screen itself is a 6.6-inch Full HD+ PLS LCD panel with an aspect ratio of 20:9 for a pixel density of 400 dpi. It benefits from a nice refresh rate of 120 Hz which makes it even smoother than the A33. Also, it is protected by Corning Gorilla Glass 5 glass. 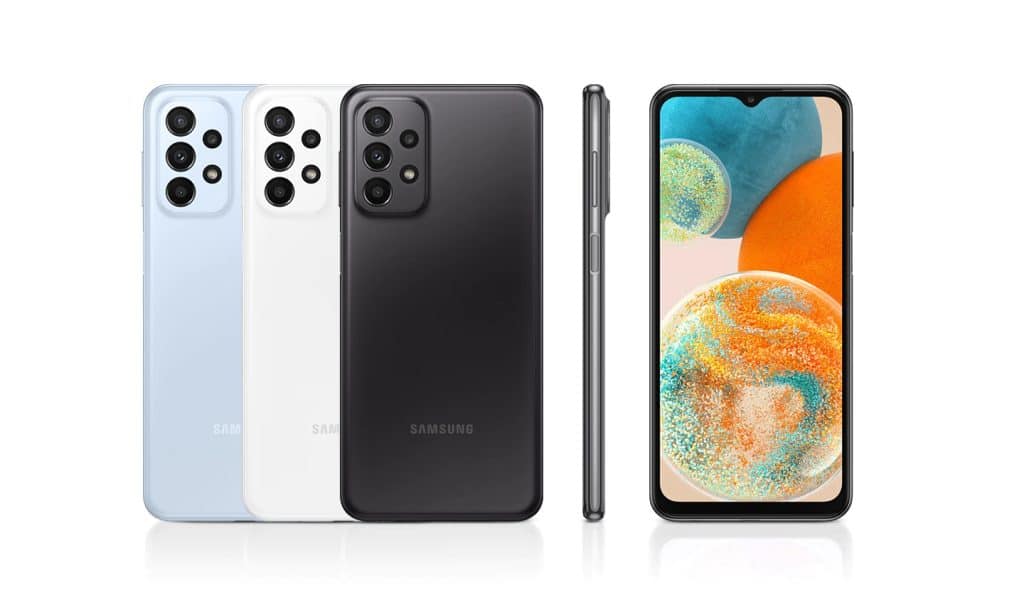 A big autonomy for the Galaxy A23 5G

Under the screen, the Galaxy A23 contains a Qualcomm Snapdragon 695 SoC engraved in 6 nm and offering compatibility with 5G. The chip is associated with 4 GB of RAM as well as 64 GB of expandable storage up to 1 TB thanks to a microSDXC card.

In order to power its device, Samsung has integrated a large 5000 mAh battery which, according to the firm, should offer a two-day autonomy. It is compatible with fast charging at 25 W. According to the brand, this should offer 50% charge in 30 minutes. Finally, the device runs natively on Android 12 with the One UI 4 house overlay. However, it should soon benefit from an update to Android 13 and potentially to Android 14.

Forced to make some hardware concessions at the photo level, Samsung relies on its software expertise to produce very beautiful photos with the Galaxy A23 5G. However, this does not prevent the presence of a main sensor with optical stabilization. In all, we are entitled to a quadruple camera comprising:

In the notch of the screen, we discover an 8-megapixel front camera with an aperture of f/2.2. Finally, the mobile can record videos in 1080p at 30 fps.

Galaxy A23 price and availability

The Samsung Galaxy A23 5G smartphone is already available in France for €319. There are options between the colors white, black and blue.