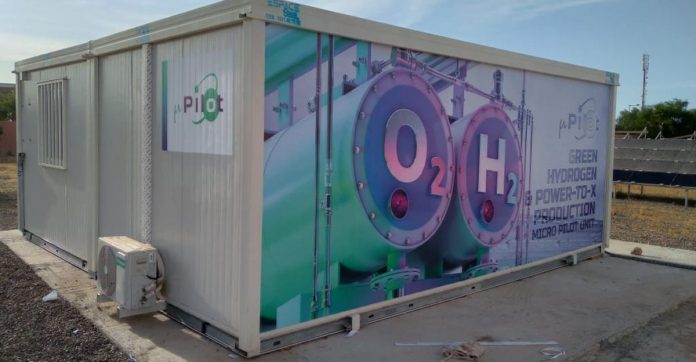 The Solar Energy and New Energies Research Institute (IRESEN) has successfully installed its 1er system for the production of green hydrogen on a Micro-Pilot scale, as part of its project ” Power-to-X µPilot “.

1er production system that the Institute for Research in Solar Energy and New Energies (IRESEN) completed this summer consists of an electrolysis unit with a capacity of 20 kW coupled to photovoltaic (PV) solar panels. This first electrolyser will be tested under variable load of renewable electricity. This is an initiative that is part of his project ” Power-to-X µPilot “.

Incubated at the heart of BenGuerir’s Green Energy Park, and in collaboration with our partner UM6P, the project will be equipped in its next phases with additional technological bricks, from the value chain of the green hydrogen sector and its applications, commonly called sector Power-To-X “.

In terms of production, it will be a question of green ammonia, green methanol and fuels. Aspects such as sustainable mobility and the storage of renewable electricity, using hydrogen and fuel cells, will also be taken into account. In addition to being a research and innovation tool, this Micro-Pilot will play a key role in the training and skills development of IRESEN and UM6P staff and their partners in the ecosystem of hydrogen in Morocco. Namely the members of the National Hydrogen Commission » and the Cluster « Green H2 Morocco “.

Thus, students, young and experienced researchers, technicians, engineers and executives from the public and private sectors will benefit from training programs adapted to their needs and to the technical and technological challenges faced by their respective structures, in the framework for the deployment of projects Power-To-X ” in Morocco.