Since Rock is less and less, and this is fortunate, ethnocentric on the West, yesterday’s evening at Supersonic Records allowed us to travel from the Maghreb to Japan without leaving rue Biscornet.

It’s when we are asked for a password to be able to enter the Supersonic that we realize that something is wrong… In fact, the Supersonic is reserved for a private party tonight, and the concerts are suddenly relegated to Supersonic Records, the record store next door… Which isn’t a problem, the sound is also excellent there, and the lighting is much better, allowing amateur photographers to build up more beautiful memories. We’re here tonight to take advantage of the visit to town of a very young Japanese group, Kuumatic : it must be said that, given the high level of the rock scene, psyche in particular, in the land of the Rising Sun, we decided not to miss any more a Japanese group that would pass through Paris… 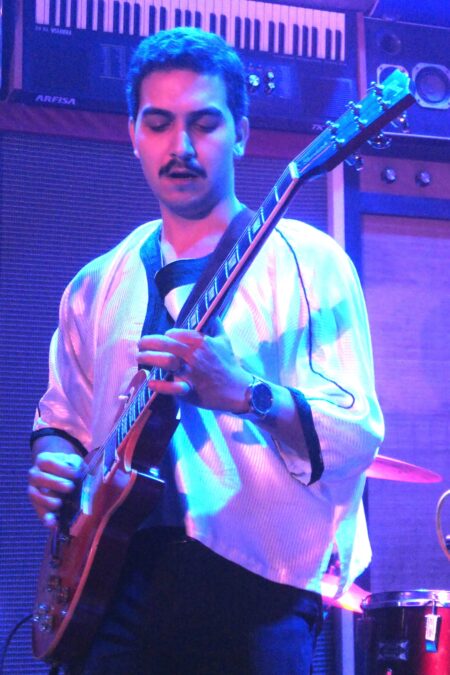 It is 8:45 p.m. when the power trio Cheb Sonic & The Berber Kings takes the small stage by storm, with an energy that will never fail them during the 40 minutes of vigorous rock’n’roll that they will offer us. If the group presents itself as Moroccan, with projection of funny videos mixing camels, desert, flying saucers, and even with the horrible Z(emmour) which hits the key in the middle, its music does not have much of oriental, nor even “raï”, except for words in Arabic. We are rather in front of a sort of boosted classic rock, sometimes bordering on seventies hard rock (a friend told us, skeptical, that he stopped listening to this kind of music since the 80s…). The bass player is bouncy, the unleashed drummer can’t control his drums which leak under his blows, the guitarist is more reserved but sends rather inspired solos: too bad the vocals, a little behind the rest, are disappointing… We’ll learn tonight – as an introduction to Surfin’ Tangier – that Tangier is a city with a sulphurous reputation, but from which, in fact, everyone wants to flee. We are told that the West having plundered the Maghreb for centuries, they themselves decided to plunder the best of the West, before starting an approximate and cheeky version of the Eternal Flame of the bangles, in Arabic. Well, we had a feeling of amateurism from time to time, but the energy was tangible, and the humor made a lot of things happen. Nice success in a now crowded Supersonic Records. 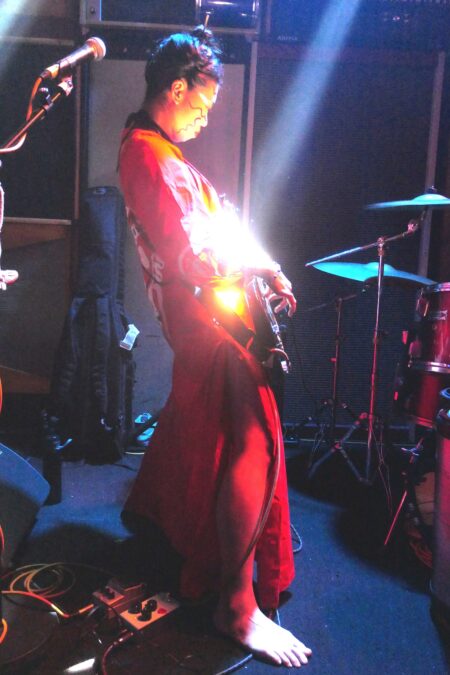 9:40 p.m.: the trio of Tokyoites from Kuunatic immediately impresses with her modern outfits but reminiscent of traditional kimonos, and with the faces of the three musicians on which strange arabesques are drawn. Even before the music begins, the journey has begun. Keyboards, bass and drums, with a hint of flute here and there and a few instruments that look more traditional and that we shake from time to time, that’s the basis on which Kuunatic build their music, and above all pose their voices. Majestic, imposing, powerful voices, which are the main characteristic of the group.

Kuunatic offers us a music that combines primitive pulsations – the drums of Yuko Araki -, atmospheric sounds produced by the keyboards of Fumie Kikuchiand a rock base created by the bass playing of Shoko Yoshida : the result is that it is very difficult to put a label on what we listen to, and that we can find it magical (it is our opinion) or boring (at the back of the room, people talk shamelessly, and with little respect for the musicians.The group does not hesitate to go from time to time towards dissonance, towards discomfort, even to offer us a few moments of chaos. 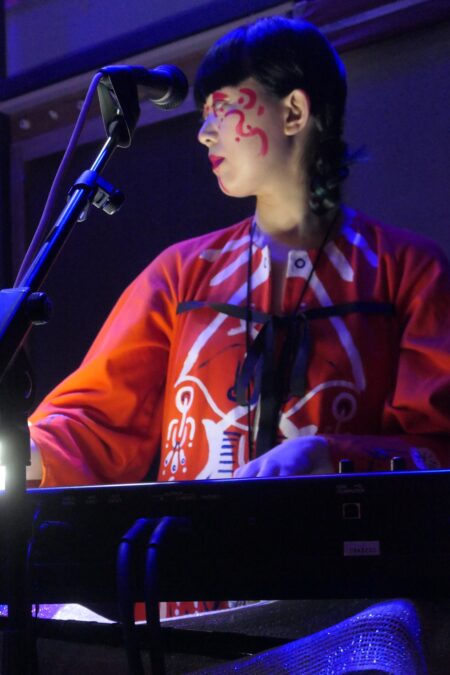 Shoko rasps her plectrum over her strings, looking for different, perhaps unheard of sounds: she hardly ever smiles, completely assuming a scowling, scowl persona that perfectly complements her bass playing. All communication with the public is the responsibility of Fumie, who explains to us that Kuunatic is on a European tour and is playing for the second time in Paris.

The pieces are sometimes hovering, regularly seek the kind of sounds and melodies that are immediately associated in the West with ancient Japan, while the rhythm anchors everything in contemporary rock. It would suffice to close your eyes to be swept away, but we prefer to keep them wide open to enjoy this spectacle of three red specters agitating for us.

The very last part of the 50-minute set ramps up, but perhaps not enough to satisfy mainstream rock audiences. The room calls for a reminder which is granted to us after a time of reflection. Even if the concert will have lacked this spark which transforms quality music into a real emotional or aesthetic experience, we will now follow our three attractive yōkai…