Nvidia and Microsoft will go hand in hand to shape an artificial intelligence (AI) supercomputer based on the cloud of the second, Azure. The two companies want to meet the growing demand for generative AI, like SLAB.

The supercomputer will be equipped with tens of thousands of graphics processors from Nvidia, including the latest H100, released in October, among the most powerful in the world, and its predecessor, the also very powerful A100. Nvidia will also provide one of its network solutions and its AI Enterprise software suite. The latter will make the link with Microsoft’s cloud infrastructure, Azure. 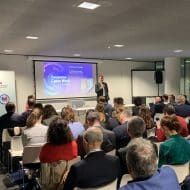 As part of the partnership, Nvidia will be able to take advantage of Azure’s scalable virtual machines to accelerate its progress in scalable AI. The two companies will also work on optimizing Microsoft’s DeepSpeed ​​deep learning software.

Manuvir Das, Vice President of Enterprise Computing at Nvidia, notes that ” Technological advancements in AI as well as industry adoption are accelerating. The breakthrough in basic models has triggered a tidal wave of research, encouraged new startups and enabled new enterprise applications “.

The release date for Azure’s cloud-based AI supercomputer has not been disclosed. Either way, Nvidia and Microsoft are set to continue this collaboration for some time: in its communicatedthe GPU maker announces an agreement “ multi-year “.