Officially unveiled at the Xbox and Bethesda Games Showcase on June 12, Minecraft Legends took to the Xbox Developer_Direct to share new information about its PvP mode as well as its release date. 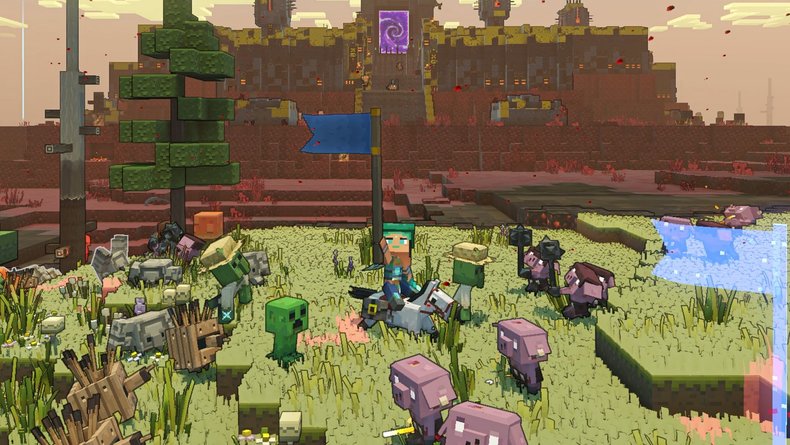 If we had already had wind of some information about this 4v4 multiplayer mode, we only had a few visuals. The problem is now solved, Mojang took advantage of this long presentation to reveal in detail how this PvP mode works.

In this experience of up to 8 players, the different teams will have to establish their defenses and think of strategies to destroy the opposing camps. The resources obtained are common to the players and the procedural map changes with each game, which changes the possibilities in all your future multiplayer sessions. The creation of elements is much easier compared to Minecraft, allowing you to create fortifications or traps in one click.

But what is Minecraft Legends?

For all those who haven’t followed its news, Minecraft Legends is a new adaptation of Minecraft that could be of interest to fans of the famous survival game and RTS in general.

This fully playable co-op adventure will invite you to explore all of the Minecraft biomes that are plagued by an invasion of piglins from the Nether. These are absolutely ferocious and nothing seems to stop them in their destructive madness. You will need to forge alliances with the different species inhabiting the game universe to achieve victory in strategic battles from above.

Minecraft Legends is scheduled for April 18, 2023 on Xbox Series X|S, Xbox One, PlayStation 5, PlayStation 4, Nintendo Switch and PC. It will be included upon release in the Xbox Game Passthe PC Game Pass and the Xbox Cloud Gaming.