The official website of the television anime of TNSKit is My master has no tail (Uchi no Shishō wa Shippo ga Nai) The manga began streaming the show’s third promotional video on Sunday. The video also reveals that the anime will premiere on Tokyo-MX September 30, the MBS on October 1, the B.S. Asahi October 2 and AT-X October 4. The video also features previews GARNiDELiAThe opening theme song of “Genai Yūgi” (Fleeting Love Game). 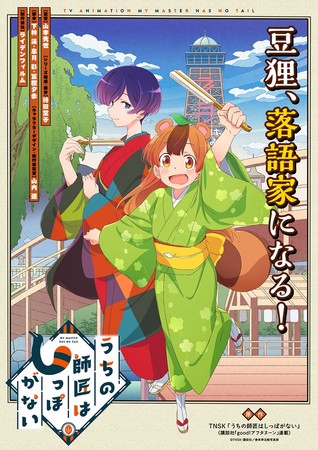 The TV anime will feature:

The fantasy story is set in the Japanese Taishō era (1912–1926). He follows Mameda, a shapeshifter tanuki girl who dreams of becoming human. Mameda transforms her outward appearance into a pretty, raven-haired human girl and heads for the bustling city of Osaka. However, people instantly see through Mameda’s appearance, and a beautiful woman ruthlessly tells a despondent Mameda, “Go back where you came from.” It turns out that this woman named Bunko is herself a supernatural creature who turned into rakugo (comic storytelling) storyteller. Mameda begs Bunko to become his master and teach him how to play a human.

TNSK debuted in the manga Kodanshait is Good! Afternoon magazine in January 2019 and it is ongoing.