It’s no longer a secret that the next flagship smartphone of the OnePlus brand will be officially presented on February 7. It is rumored that another mobile would also be formalized. This would be the more affordable OnePlus 11R 5G.

Several weeks ago now, the OnePlus brand announced that the next official presentation of smartphones would take place February 7 to unveil the OnePlus 11 5G who has already made official at an event in China. We will finally be able to know the details not of the technical characteristics of the device which are already known, but the conditions and dates of marketing of the mobile for the European markets. But the giant Amazon has apparently leaked important information about OnePlus. Indeed, for a few minutes, the site published an image featuring the OnePlus 11R 5G and mentioning the date of February 7, 2023. The message does not leave any details about the OnePlus 11R 5G, but seems to confirm some rumors that reported the presentation of another mobile, in addition to the OnePlus 11 5G expected for this date. Some time later, it’s OnePlus India confirms this by posting a message on Twitter. 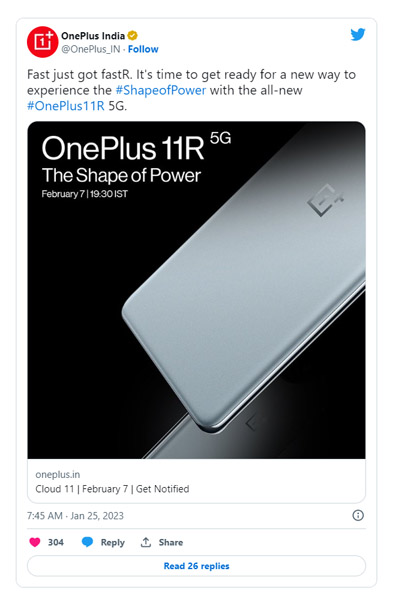 What configuration for the OnePlus 11R 5G and other expected products?

The smart phone OnePlus 11R 5G may not be for all markets. He succeeds the OnePlus 10R from last year which was not offered in France, for example. The idea for this model is to offer an interesting and powerful configuration for a reasonable price. It is rumored that the OnePlus 11R 5G could have a processor Qualcomm Snapdragon 8+ Gen 1of a 5000mAh battery and that he could bear wired charging up to 100 watts.
In addition to the OnePlus 11 5G, the brand will present its new OnePlus Buds Pro 2 headphones as well as a mechanical keyboard for demanding gamers and a television (which will not be available in France).