After the desert area of ​​Gobbi, version 2.3 of Tower of Fantasy will lead players to the new tropical and lush land of the Miasma Swamp, with a new narrative arc and new instances. 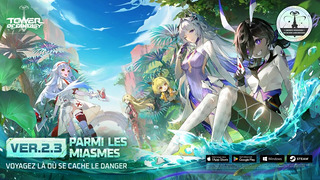 With regularity, the Western version of Tower of Fantasy chain updates to renew its content. Thus, after a narrative arc articulated around the desert zone of Gobbi and the cyberpunk city of Mirroria, update 2.3 of the MMORPGs cross-platform, titled “Among the Miasmas,” will take players to a lush new land.

Update 2.3 will unlock access to a new area, Miasma Swamp, which promises “diverse landscapes filled with rocky valleys and abundant rainforest-like vegetation.” According to the developer, the place takes the form of a “dynamic environment that is full of new creatures and new plants”, including in particular interactive elements in the decor – such as “neon mushrooms or mysterious eggs” which are intended to spice up exploring the area by enrolling in puzzle-solving mechanisms.

Like almost every update of Tower of Fantasy, this version 2.3 brings its share of high content level : three new instances and challenges, as well as two bumps new to face. The first, Jormungan, “uses a claymore to unleash vicious attacks”, while Eva “launches spinning assaults boosted by her lightning stats”. The specificity of the two bumps is that they deploy a second attack phase during which their attack range and number of lightning-type hits increase. Players will have to prepare for and anticipate them.

Tower of Fantasy update 2.3 will be rolling out to Western Tower of Fantasy servers this February 2 and will coincide with the MMORPG’s first six months of operation. The Hotta studio therefore promises animations and mini-games to commemorate this (half) anniversary and distribute rewards to players.