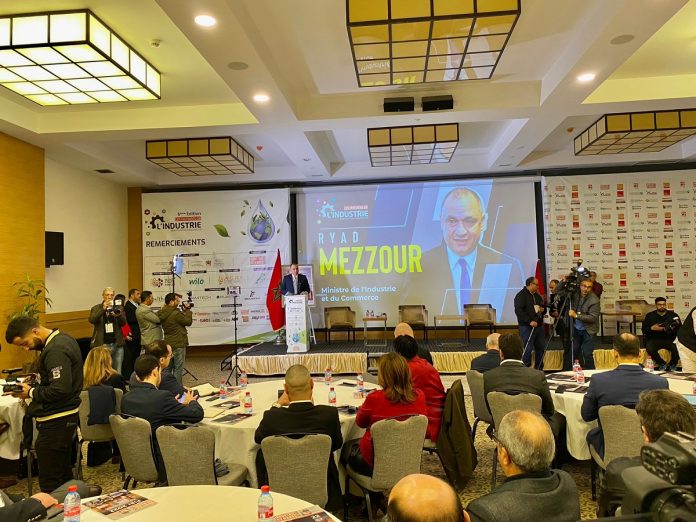 The spotlights came on this morning on the 5th edition of industry mornings, where the issue of water is the central subject. The debates have just opened after the opening speech of the Minister of Industry and Trade, insisting on the opportunities and denouncing the false trial made to the agricultural sector.

It’s a packed room that welcomes this morning the 5th edition of industry mornings in Casablanca. Organized by Industrie du Maroc Magazine, under the dual aegis of the Ministries of Industry and Trade, and that of Water, the debates focused on the theme: “Water industry, urgent and future challenges”.

After a brief opening by Hicham Rahioui, founding president of Industrie du Maroc, the Minister of Industry and Trade, Ryad Mezzour, drew up an inventory of the water situation in the Kingdom, and called on industrial players to seize the opportunities opened up by this water crisis.

Read also: a 5th edition focused on the water industry, its urgent and future challenges

Indeed, in his welcome address, Hicham Rahioui indicated that the theme of the day is “in accordance with the speech of His Majesty King Mohammed VI, may God assist him, on the issue of water”. Recalling that the Sovereign, in this speech, called for optimal management of water resources, he specified that far from being temporary, the challenges in correlation with this rare resource have become structural. In addition, the founding president listed some actions put in place by the public authorities to deal with it. Among other actions, the establishment of a National Water Program benefiting from an envelope of more than 383 billion dirhams of water, an Integrated Water Master Plan, as well as the launch of the construction of several new dedicated infrastructure.

Also, this edition aims to “federate the commitment of the various stakeholders, strengthen the efficiency and harmony between the actors and to consolidate the efforts made to date, in the management and development of water resources” , he concluded, leaving the floor to the Minister.

“Faced with the worst drought that the Kingdom has experienced in the last 40 years, His Majesty’s instructions are clear”, declared Ryad Mezzour at the start of the game. And to continue: “it is a question of launching initiatives and innovative projects whatever they are”. If this appeal appeals to all layers of society, it has more than ever aroused an unparalleled mobilization on the side of the industrialists, indicated the Minister. For him, beyond the emergency measures adopted by the authorities, operators must clearly understand that there is a business to be made. Both in terms of equipment imported in this context, and jobs that can be created.

Clearly, in addition to environmental issues, the control of water resources opens up enormous investment opportunities. On the other hand, the Minister was offended by the “trial made against the agricultural sector”. According to him, the consumption attributed to agriculture is somewhat excessive, especially since all the uncontrolled factors (evaporation, anarchic pumping, etc.) are attributed to it.

At the end of his remarks, Ryad Mezzour urged the industrialists in these terms: “there are billions to be seized, more than 350 billion dirhams. You can do everything, we are at your side to seize all the opportunities.

The debates continue with a keynote and 2 panels, one on water saving, and the other on infrastructure issues.